Do you know Python? You are also an Embedded Developer!

It’s clear that Python is the most popular programming language of 2019. The rise of Python has been especially prominent in the embedded field. It seems that everyone is talking about it.

As a high-level programming language, It allows you to focus on the core functionality of the application by taking care of common programming tasks.

The simple syntax rules of Python further makes it easier for you to keep the code base readable and application maintainable.

Zerynth opens IoT and embedded development to the huge community of Python programmers. It allows the developers to develop IoT projects using the popular 32-bit microcontrollers.

With 100+ supported libraries, Developers save a huge amount of time while using Zerynth, These libraries let the developer focus on the core of the project,  rather than handling low-level details.

In this article, we will be looking at the basics of Python, from both perspectives – the embedded development and the traditional perspective.

Python’s open source structure and simple syntax are just some of the things that recommend it for embedded and IoT projects. Unlike C, Python is not so error-prone, and it’s easily readable.

If you’ve been using it for embedded projects in the past, you’ll know what we are talking about. If you haven’t, start this tutorial and learn why everyone is talking about Python in the embedded.

Let’s start with the Basics of Python Programming Language

To get started working with Python 3, you’ll need to have access to the Python interpreter. There are several common ways to accomplish this. Check this guide for installing Python for Windows, Linux and Mac OS

Python is one of the easiest languages to learn, and creating “Hello, World!” program is as simple as writing:

The variables num1 and num2 are added using the ‘+’ operator. The result of the addition is then stored in another variable “sum”.

The print() function prints the output to the screen. In our case, it prints 8 on the screen.

Note that any line starting with ‘#’ is a comment. Comments are used in programming to describe the purpose of the code. This helps you as well as other programmers to understand the intent of the code. Comments are completely ignored by compilers and interpreters.

Operators are special symbols in Python that carry out arithmetic or logical computation. The value that the operator operates on is called the operand.

Here, ‘+’ is the operator that performs addition. 2 and 3 are the operands and 5 is the output of the operation. 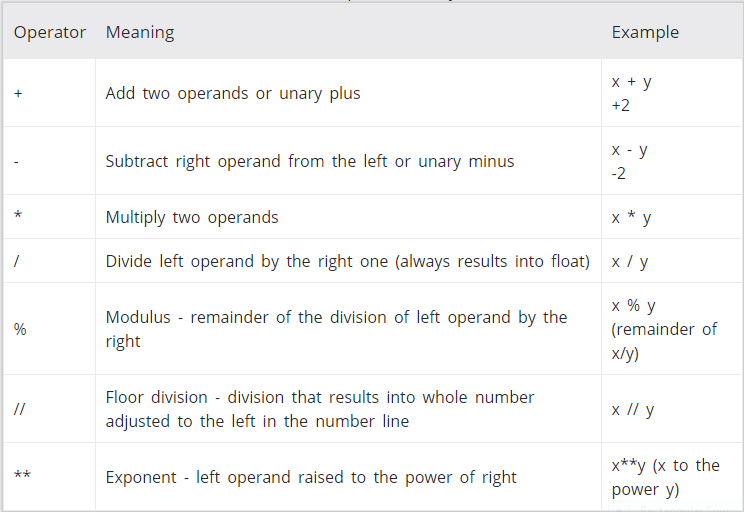 Comparison operators are used to compare values. It either returns True or False according to the condition.

Logical operators are the and, or, not operators.

Bitwise operators act on operands as if they were a string of binary digits. It operates bit by bit, hence the name. 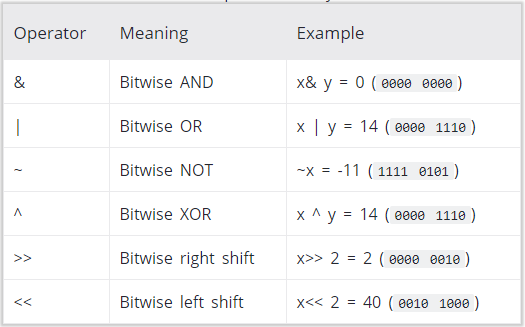 Bitwise operations might be hard to understand, depending on your knowledge of binary system, logic gates operations.
What’s great is that these operations operate in the same manner no matter the programming language you are using.

Besides numbers, Python can also manipulate strings, which can be expressed in several ways. They can be enclosed in single quotes (‘…’) or double quotes (“…”) with the same result. \ can be used to escape quotes:

What are if…else statement in Python?

Decision making is required when we want to execute code only if a certain condition is satisfied.

The if…elif…else statement is used in Python for decision making.

Here, the program evaluates the test expression and will execute statement(s) only if the text expression is True.

If the text expression is False, the statement(s) is not executed.

In Python, the body of the ‘if ‘ statement is indicated by the indentation. The body starts with an indentation and the first unindented line marks the end.

Python interprets non-zero values as True. None and 0 (zero) are interpreted as False.

When you run the program, the output will be:

In the above example, ‘num > 0’ is the test expression.

The body of  ‘if’ is executed only if this evaluates to True.

When variable num is equal to 3, test expression is true and statements inside the body of ‘if ‘ are executed.

If variable num is equal to -1, test expression is false and statements inside the body of ‘if’ are skipped.

The print() statement falls outside of the if block (unindented). Hence, it is executed regardless of the test expression.

The ‘elif’ is short for else if. It allows us to check for multiple expressions. If the condition for ‘if’ is False, it checks the condition of the next ‘elif’ block and so on.

If all the conditions are False, body of else is executed. Only one block among the several if…elif…else blocks is executed according to the condition. The if block can have only one else block. But it can have multiple elif blocks.

What is for loop in Python?

Here, “val” is the variable that takes the value of the item inside the sequence on each iteration.

Loop continues until we reach the last item in the sequence. The body of for loop is separated from the rest of the code using indentation.

When you run the program, the output will be:

The while statement is in Python similar to C and other most used languages.

The basic example is:

break and continue Statements, and else Clauses on Loops

The break statement, like in C, breaks out of the smallest enclosing for or while loop.

Loop statements may have an else clause; it is executed when the loop terminates through exhaustion of the list (with for) or when the condition becomes false (with while), but not when the loop is terminated by a break statement. This is exemplified by the following loop, which searches for prime numbers:

Yes, this is the correct code. Look closely: the else clause belongs to the for loop, not the if statement.

The continue statement, also borrowed from C, continues with the next iteration of the loop.

In Python, a function is a group of related statements that perform a specific task.

Functions help break our program into smaller and modular chunks. As our program grows larger and larger, functions make it more organized and manageable.

Above shown is a function definition which consists of following components.:

How to call a function in Python?

Once we have defined a function, we can call it from another function, program or even the Python prompt. To call a function we simply type the function name with appropriate parameters.

The most useful form is to specify a default value for one or more arguments. This creates a function that can be called with fewer arguments than it is defined to allow. For example:

This function can be called in several ways:

Basically every example we saw before can be replicated also with Zerynth.

To get started with Zerynth, check this great installation guide. In addition, the Getting Started Guide will show you how you can run your first examples on Zerynth Studio.

For more information about each function and module mentioned below, check the documentation of Zerynth.

We are going to start our examples with the simplest one we can make: A “Hello, World!” example!

This is also the simplest example to start with embedded development.

The example starts with importing the streams library; That library is used for communication between the board and the PC serially.

Then in the infinite loop, the device prints “Hello Zerynth!” every second.

Sleep function is used as a delay for 1 second. Note that in Zerynth the sleep() function suspends the current thread for time expressed in time_units BUT all the other threads are free to continue their execution! 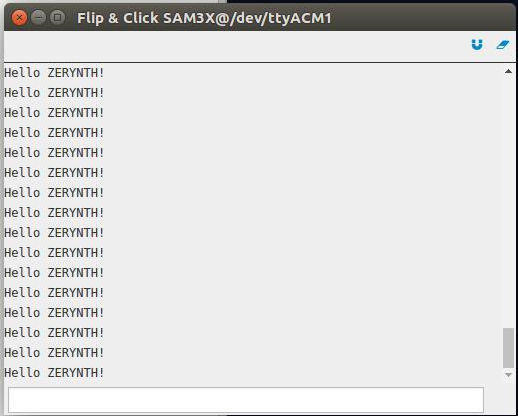 Then we will have a look at an example that involves bit handling. We are going to blink a LED for a given time then switch it off. 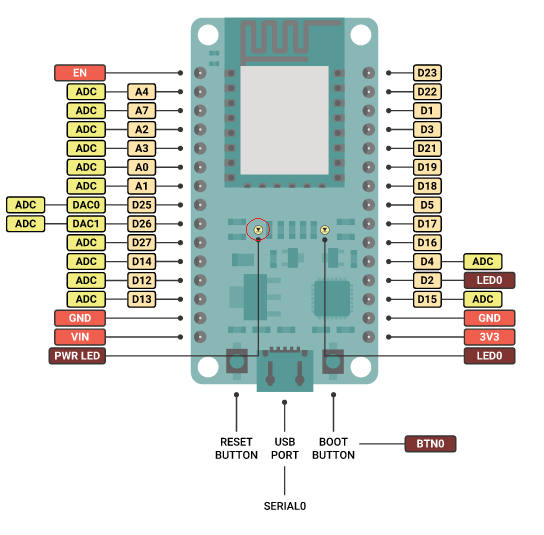 In this example, we will have a deeper look at the serial communication between the microcontroller and the PC, Through our Streams library 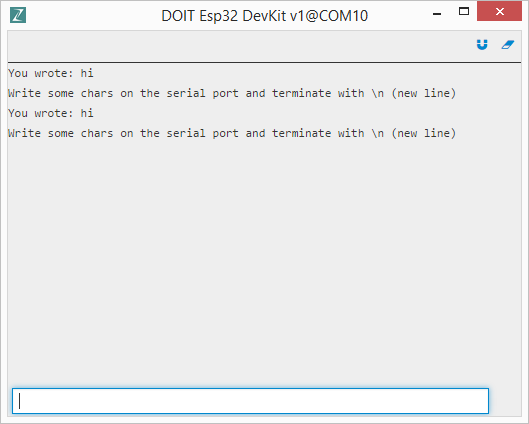 Now, We’ll have a look at an example that uses Wifi connection.

This is a simple wifi driver initialization and connection to a wifi network.

Finally, we will have a look at a full example, that connects your device to the internet and send data to the cloud using MQTT.

If you haven’t downloaded Zerynth Studio yet, now is a perfect time. It’s free to download and available for Windows, Linux, and Mac OS.