Industrial IoT technologies are supported by artificial intelligence: the extraction of data from machinery during processing phases allows you to enable the Industry 4.0 paradigm in any company.

Making daily life better and easier, automating processes, and making them as mechanical as possible allows us to limit our physical presence and human intervention in many activities. Using these techniques in the industrial field allows us to obtain numerous advantages with respect to improving machine performance and productivity. This is how artificial intelligence enters into businesses and helps to start industry 4.0 projects.

The term artificial intelligence (AI) defines the ability of a machine to emulate human capabilities such as reasoning, learning, planning, and creativity.

“It is the discipline that encompasses the theories and practical techniques for the development of algorithms that allow machines (especially computers) to display intelligent activities.”

In fact, these are machines so efficient that they automatically adapt their processing without any need for human intervention, making them capable of responding to the inputs provided from the training of the examples previously stated.

Interest in this discipline and the problems related to intelligence was understood as early as the 1900s, when Alan Turing, for the first time, proposed a computer model known as the “Turing machine”. He later published an eponymous test capable of establishing the intelligence of a given machine, while the concept of AI was introduced earlier at John McCarthy seminars in 1956. In recent years, we hear more and more of artificial intelligence applications even in industry 4.0.

Industry 4.0 as a creative process

With the advent of new technologies, the concepts of creativity and production have been brought into question, raising aspects that, until recently, were typical characteristics of humans.

According to the Microsoft and EY AI report in “European Manufacturing Industries 2020”, from interviews with 86 companies, it is clear that data extraction is the most important element for the proper functioning of artificial intelligence solutions. Industry 4.0 applications are becoming increasingly necessary and indispensable to speed up the automation process in the production phases.

Since many manufacturing processes have traditionally been performed manually, digitization is now more necessary than ever to obtain historical data and offer sophisticated artificial intelligence solutions.

Industry 4.0 has drawn attention to new manufacturing technologies where the financial crisis, globalization, intense competition, and rising asset prices have spurred the adoption of artificial intelligence and industry 4.0 technologies. This interest began in 2011 and has been accelerating over the past 4-5 years.

The data suggests that Business Intelligence and Artificial Intelligence solutions are the technologies that will receive the most attention from manufacturing companies in the near future, involving a compound annual growth rate (CAGR) of 64% from 5 operations in 2014 to 59 operations in 2019. Again, according to the report from Microsoft and EY, a total transaction value of 1.4 billion Euros resulted for the period. 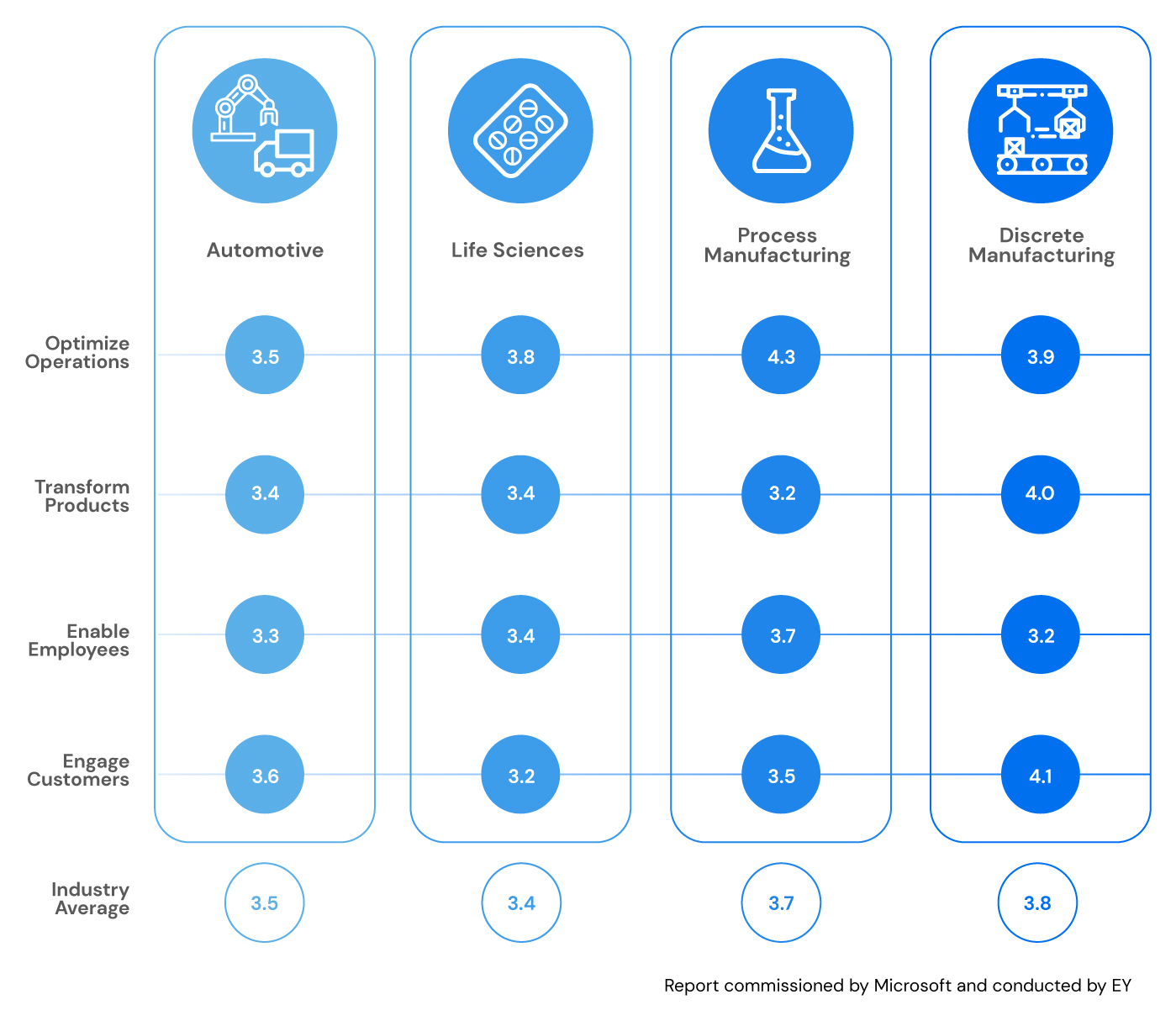 Use AI in the company organization

The advantages of using AI algorithms are that they are able to bring benefits to the entire organization based on the areas of interest and objectives, varying slightly between manufacturing sectors with the aim of optimizing operations using artificial intelligence. 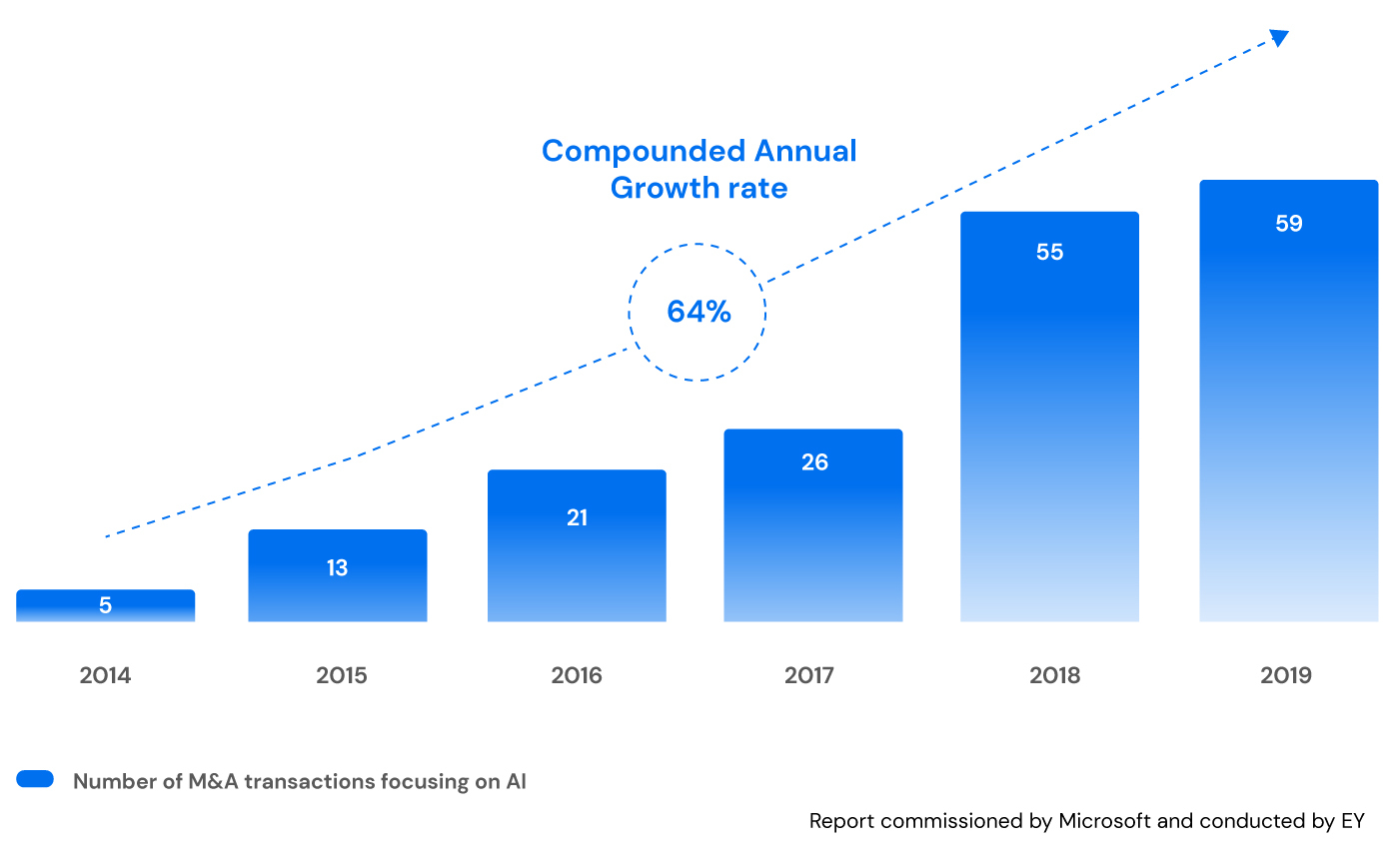 The four areas of interest for AI mainly concern the sectors of operations, production processes, and smart operations; but the annual growth rate in the global market is growing exponentially.

The Internet of Things must be considered as an enabling technology supported by artificial intelligence. The huge amount of data generated by connected devices, if properly analyzed, allows you to create specific advanced algorithms and models.

Figure 3 shows the importance of adopting Industrial IoT solutions as the core of enabling technologies for the application of artificial intelligence in industry, where blockchain, KCPS, Cloud and Edge Computing and Big Data Analytics solutions can then be implemented.

Figure 3. Industrial IoT as the core of AI

Bringing artificial intelligence into a company means beginning with the data extraction process and then implementing production analysis and optimization strategies. For these reasons, the Industrial IoT is a fundamental part of the whole process of Industria 4.0 creation.

The goal of artificial intelligence algorithms is not to replace humans, but to be able to understand and explain the outputs generated by the processes and the behavior of machines.

A real case of Artificial Intelligence

An applied case of artificial intelligence is that of Vitesco Technologies Italy, which uses predictive maintenance techniques for manual diagnostics and remote monitoring of test states for each of their assembly lines.

Thanks to their use of the Zerynth IoT Platform, it was possible for them to implement an IoT system capable of predicting the failure of the valve / sealing element 24 hours in advance and process the data acquired locally by the acquisition units then sending notifications to the maintenance team via integration with software systems that were already present in the company.

Read the full Vitesco story to find out more.

About the Author: Angelica Puddu

Angelica works in the Zerynth Marketing Team. She graduated in Digital Humanities, so she has a critical perspective of how digital technology is increasingly part of everyday life. She likes to manage and organize projects and, in her free time, she likes to attend theater workshops and play sports.