The Things Conference Italy 2018 – Thank You

On October 11th we welcomed developers from all over the world into the GATE Centre for The Things Conference Italy in Pisa. It was a day dedicated to learning about LoRaWAN and Python for IoT and industry 4.0 applications. From the number of attendants, it’s clear that the topic is extremely popular today. There were over 100 people from all around the world – developers, researchers, students, company representatives, university professors, and industry experts.

Everybody wanted to get some hands-on experience, test out different hardware solutions and learn how to combine Python and Zerynth Studio with it.

Check out the video from the conference, to see how amazing the atmosphere was:

You can also watch interviews with all the keynote presenters and with the Zerynth team. Click on the video to access the whole playlist:

Throughout the conference the keynotes where the thing that brought the whole crowd together. Of course, people like to mingle and network, but when one of the speakers was conducting a talk, everyone was drawn towards the center stage.

Zerynth CEO, Gabriele Montelisciani opened the conference, speaking about Zerynth’s journey, from the very beginning to the present moment. How the initial plan of bridging the gap between microcontrollers and Cloud providers came true, and how Zerynth became an easy-to-use middleware for IoT. He passed on the stage to Laurens Slats, The Things Network Community Manager, for his keynote on the potential of the LoRaWAN technology.

The journey of @thethingsntwrk to fulfill the promise of #LoRaWAN – Laurens Slats, The Things Network Community Manager, has just started his #keynote at the @gatecentre. We'll keep you posted about other exciting moments from #TheThingsConference

Giacomo Baldi, Zerynth’s CTO turned things towards a more practical side with his keynote on the use of Python to design LoRaWAN-based IoT Solutions. After this talk, the stage welcomed Stefano Giordano, a professor from the University of Pisa, for his talk on enabling innovation through IoT and new telecommunications services. He showed the attendants real-world examples of LoRaWAN technology, most notably in the rural parts of Tuscany  – the famous claim on LoRaWAN’s great coverage in rural areas proved.

Low Power #networks for #IoT services – that's the topic of Stefano Giordano's keynote, a professor from the @Unipisa, and the last one for the morning block of #TheThingsConference

The afternoon section of the conference saw two more captivating keynotes, the first one from Dario Kubler, Microchip’s Field Application Manager. He spoke about all the various ways to capture value from IoT, Microchip’s security solutions, and how they can help IoT developers leave security issues behind.

Dario Kubler from @MicrochipTech is holding a #keynote on capturing value from #IoT – one of the most exciting topics in the last couple of years, so naturally the @gatecentre is packed.

The last keynote of the conference belonged to Daniele Mazzei, the CTO of Things on Internet (TOI). He showed the attendees how LoRaWAN technology can be implemented on industry 4.0 projects. Daniele presented several such projects that TOI has already made, and explained the most important features of each project. If anybody was doubting whether or not they can implement LoRaWAN for their own project, they certainly weren’t anymore.

The workshops were the time for the attendees to explore all the possibilities of LoRaWAN, lead by industry experts. The conference has two dedicated time slots for the workshops – the morning and the afternoon.

The first #workshop of #TheThingsConference has begun. Laurens Slats from @thethingsntwrk will teach the attendees how to get started with #LoRaWAN.

One of the morning workshops was lead by the Microchip team, with the topic of connecting an IoT Device with LoRaWAN to the Things Network. The other workshop was lead by The Things Network’s Laurens Slats. The topic they covered was learning how to get started with LoRaWAN, experimenting with device activation and 3rd party dashboard integrations.

The @MicrochipTech team is teaching a #workshop at #TheThingsConference on how to Connecting your #IoT Device with #LoRaWAN to the @thethingsntwrk at the @gatecentre in Pisa.

The afternoon workshops were the last events of the conference. At least when it comes to the official part. One was being held by the Zerynth and TOI team, where they taught the participants how to create Python-based LoRaWAN solutions for IoT and industry 4.0 applications. As you can see from the images, it was packed with developers. 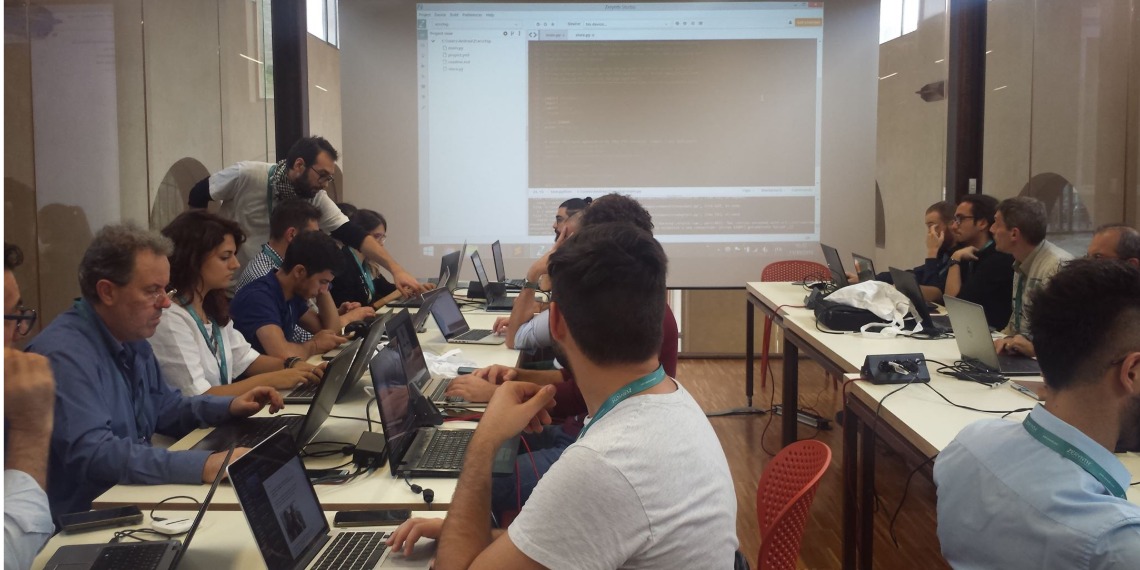 Thanks to our hardware sponsor XinaBox everyone got a chance to test out the XK12 IoT Starter Kit. We know that you can’t tell everything from the image, but the room was buzzing with excitement.

The @Zerynth and TOI (@4zerobox) teams are explaining how to create #Python based #LoRaWAN solutions for #IoT and #industry40 applications with @xinaboxcc xChips, in the last #workshop of #TheThngsConference

The other afternoon workshop with the rather mysterious title “The little blue dot”, was lead by Laurens Slats of The Things Network. By the end of the workshop, all the mysteries were solved, especially the ones regarding how to use different geolocation technologies with LoRaWAN.

After the workshops were over it was time for a well-deserved break, filled with great Tuscan food.

Thanks to all our sponsors and partners, the conference was a huge success. The sponsor booths next to the main stage were filled with exciting demos, boards, flyers, and gadgets. TOI brought a demo of their 4ZeroBox toolkit and a demo of their interactive smart retail station. The Microchip booth next to it had their smaller development boards, like the one you see in the image below. 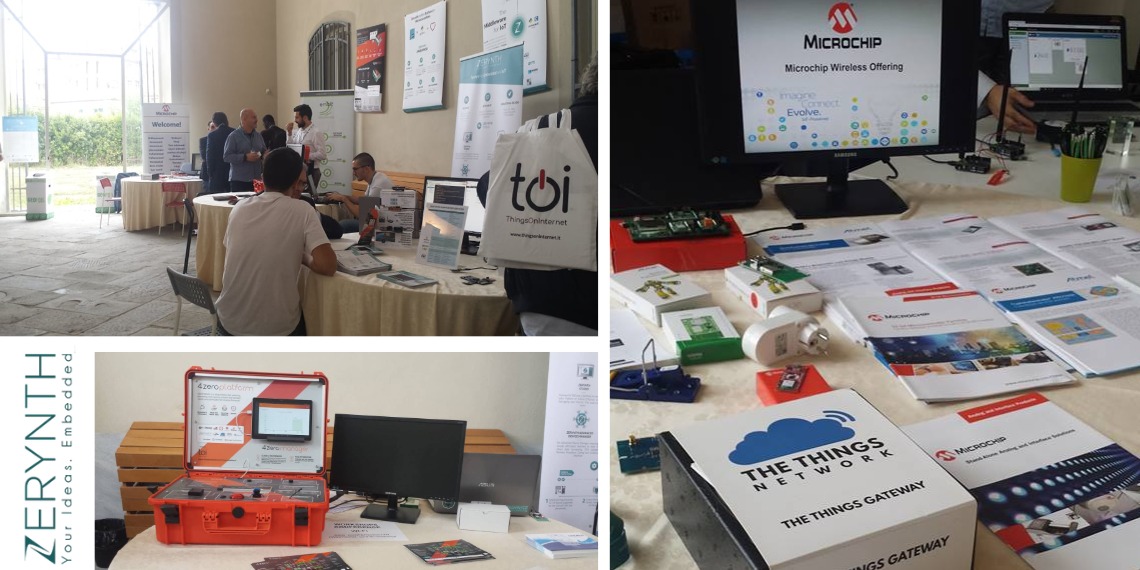 There were also booths from AAEON, one of the world’s leading developers and manufacturers of professional IoT solutions; RS Components attracted attention, as well as Elettronica In magazine, and of course The Things Network.

Check out the #sponsor booths at #TheThingsConference in Pisa. You can see @RSComponents brochures, the @Zerynth demos, @MicrochipTech boards, TOI's @4zerobox, and the newest publication from @elettronica_in magazine.

More about the GATE Centre

The GATE Centre (Galileo Aggregator for Technology and Enterprise) is a hub in Pisa dedicated to integrating local companies in and around industry 4.0. This is where Zerynth’s R&D offices are located, and where the conference took place.  The GATE initiative was promoted by the Fondazione Giacomo Brodolini and Erre Quadro srl. 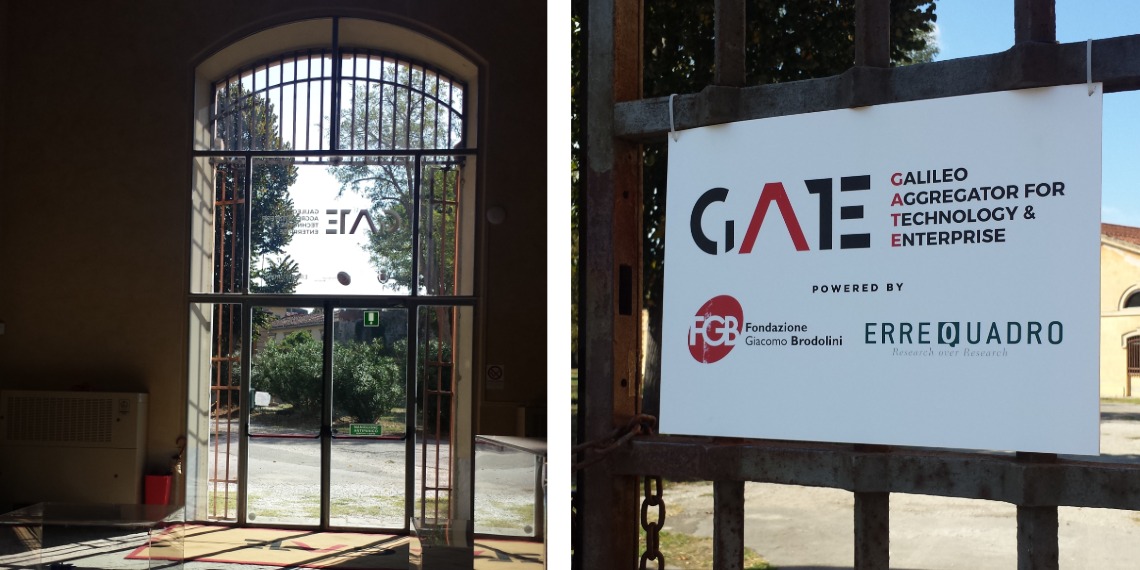 To learn more about the GATE Centre visit the official website.