What is Industry 4.0 and how to benefit from it – cutting costs and optimizing production

Right now, we’re right in the middle of the Fourth Industrial Revolution. But, what does mean for companies and industries?

From the steam engine to the first IoT device (which was in fact a toaster) we have come a long way. We will explain this in all in-depth, but first let’s take a look at the three previous industrial revolutions, and how they changed our society.

If you look from the outside, it seems that the first industrial revolution was propelled by the introduction of the steam engine and new base materials like steel and iron. But if you look from the inside, if you think about the people who brought this about, this revolution came from a desire to advance human society.

The Enlightenment, a philosophical movement that was predominant in Europe during the 18th century, advocated scientific progress.

The steam engine or the automatic machine looms would not have seen such wide use if it had not been for a new dominant way of thinking where technological progress was seen as imperative. This trend continued on to the Second Industrial Revolution.

While the First revolution focused on coal, mass production, and the textile industry, the Second Industrial Revolution was dominated by the extensive building of railroads, the invention of the telephone, the increasing use of electricity, the use of radio waves, and innovations in papermaking. 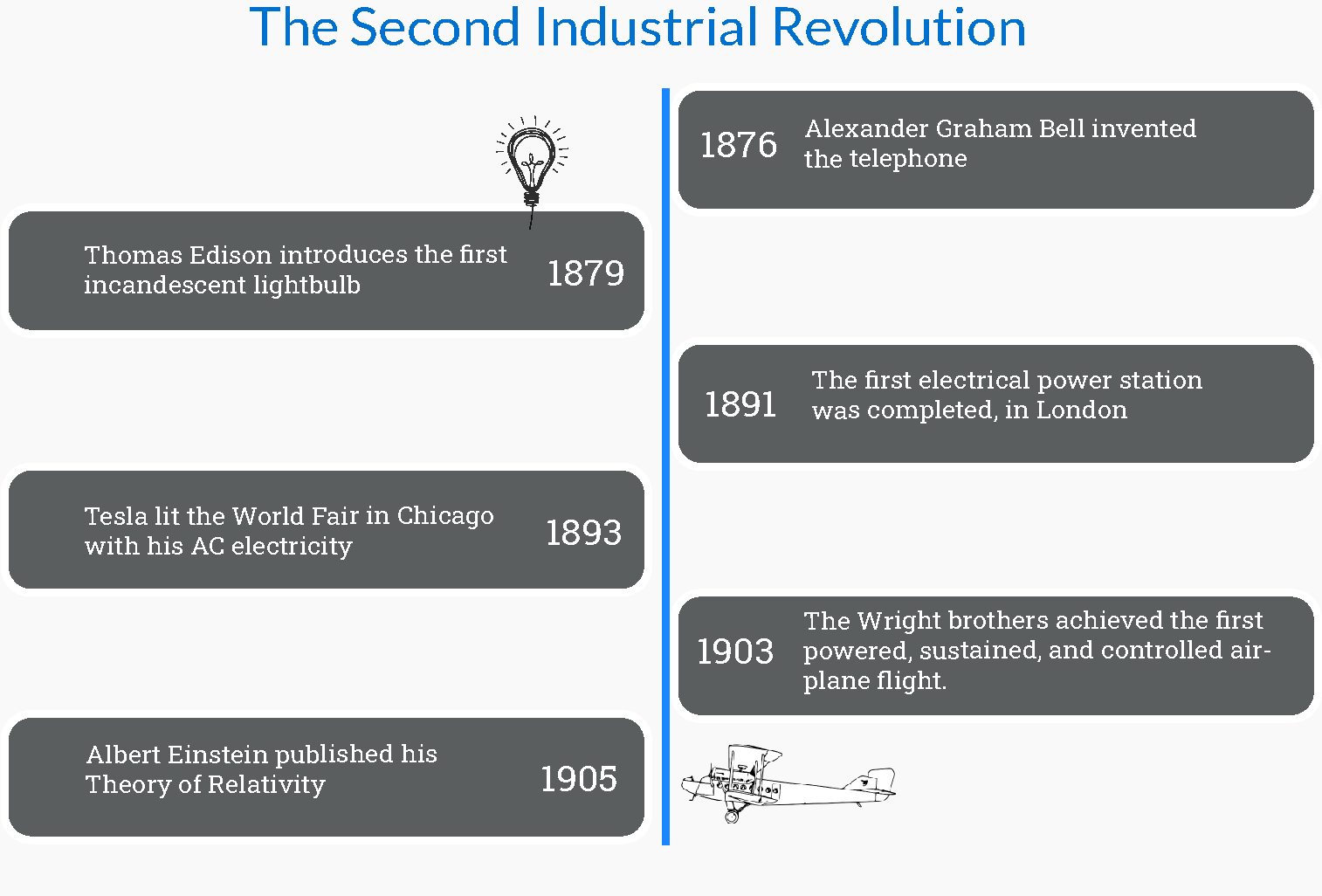 Even though 1914 will forever be remembered as the beginning of the First World War, it was the end of an era. This year marked the end of the Second Industrial Revolution and the end of the golden age of the British Industry. Other countries around the world were starting to set up their own successful manufacturing industries. In other words, the revolution had started to become truly global.

The main point of the Third Industrial Revolution is that it used information technology and electricity to automate production. 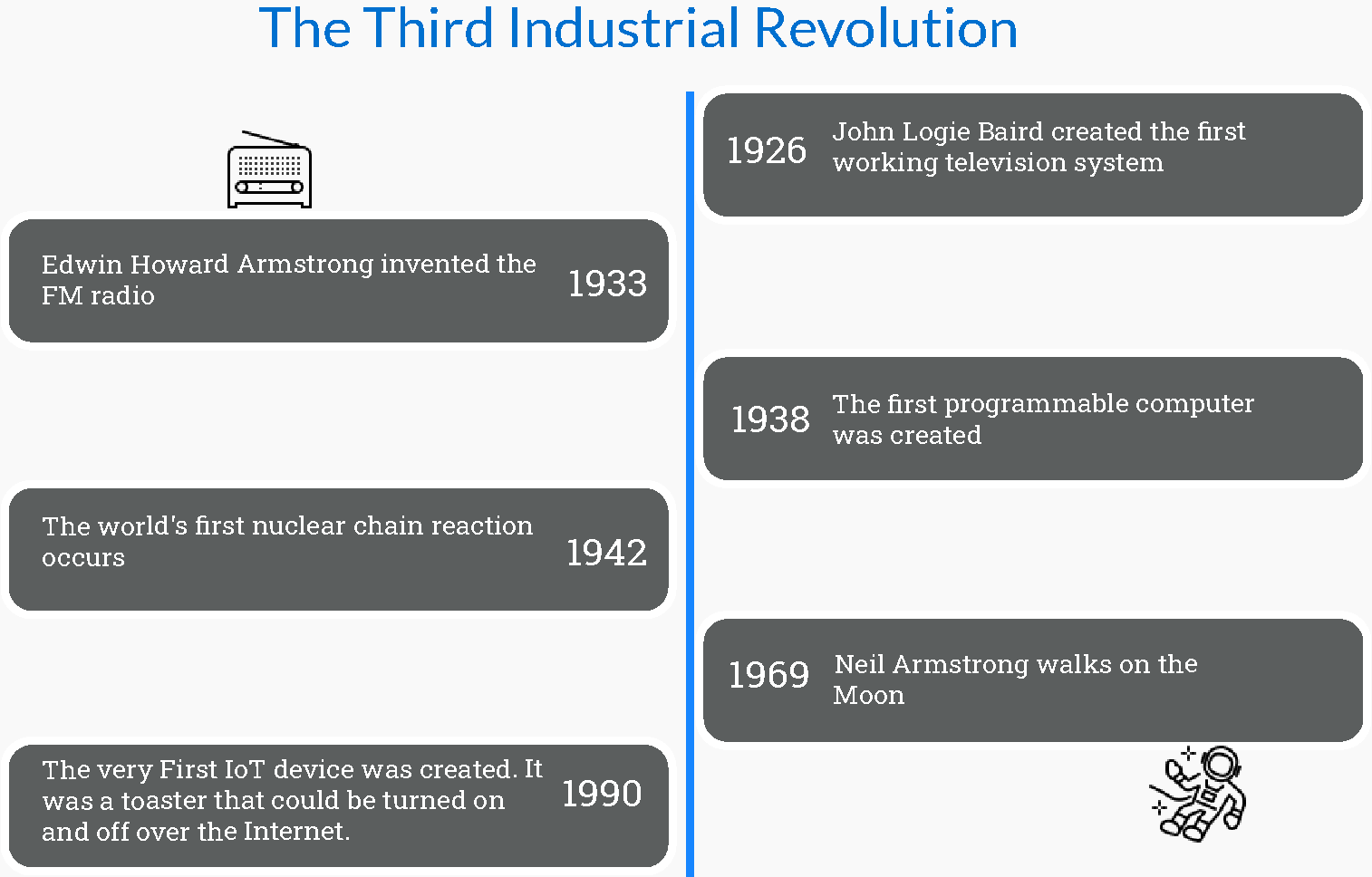 Now we have reached the beginnings of our own age. The Fourth Industrial Revolution officially began in 2011, when the term “Industry 4.0” was coined. More precisely, it was coined by the BMBF in Germany (Federal Ministry of Education and Research) and later it was made public during the Hannover Messe Industrie Fair.

In all the ways that the Third Industrial Revolution had used automation of manufacturing processes, the Fourth brought this concept to a whole new level of Industry 4.0. Whereas computers were a part of the manufacturing process before, now they communicate with each other, and with people.

The goal is for the machines to become an autonomous part of the process, by maintaining themselves. The machine collects data with sensors, analyzes it, and then gives advice based on this data. The more data it acquires and analyzes, the smarter it becomes. The most obvious result is that factories around the world are getting more efficient and more productive, because of “smart” technology.

Simply put, Industry 4.0 is the fourth stage of technological development. Remotely connected machines and computer systems are communicating, learning, and controlling industrial production with a bare minimum of human input.

Small and medium businesses are often the ones who struggle the most with implementing Industry 4.0. The most common issue is that they simply don’t know how to apply it to their unique use cases. Many companies are reluctant to change simply because it’s hard to see an immediate return on their investment.

Some say that they do not have the time, or the resources to look into digitization.

But like always, where there are opportunities, there are challenges.

If you’re the owner of a small or medium-sized business, and you feel that you should be using these new techniques, keeping up with the times, modernizing your production, and your processes, but you’re not certain how to do it, you should turn to the Zerynth Industrial Platform for answers.

The Zerynth Platform has helped numerous companies to drive their industrial IoT transformation and deliver innovative products to the market.

With the Zerynth Platform, it doesn’t matter if your machines are decades old. Thanks to our innovative tools, retrofitting is easy and fast. For example, one of our recent customers, Armal, wanted to retrofit injection molding machines that produce plastic components, but all of them were old, having an average lifetime of 15-20 years.

So, we provided them with a cutting-edge Industry 4.0 system for real-time monitoring of power consumption of their industrial machines and their entire production cycle.

What were the results?

Armal realized a 40% power consumption reduction and return on their investment within just 4 months!

If you want to see other success stories, take a look at our case study page. And if you want to cut down energy consumption costs for your own machinery, contact our experts and schedule a demo.